Heads of governments from EEU countries discussed the development of innovative ecosystem in Eurasia on the “Digital Agenda into the Globalization 2.0” Forum Printable version 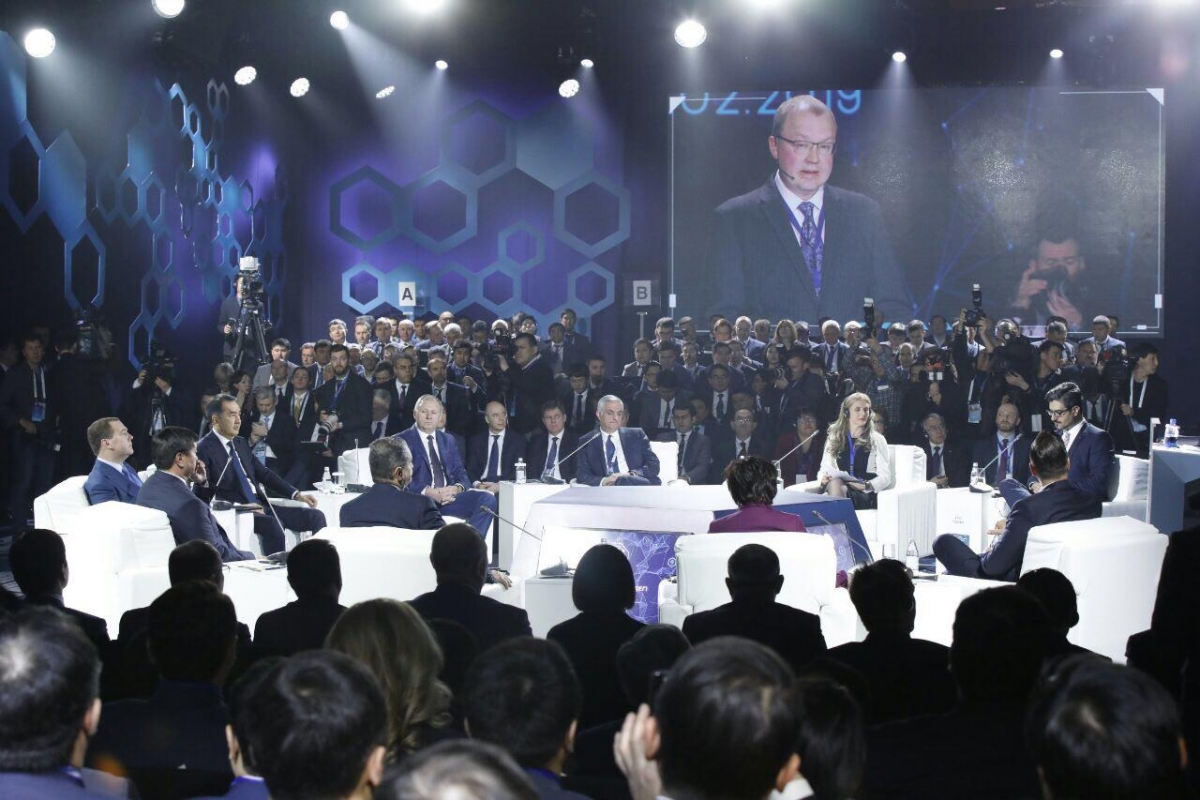 On February 1, 2019, in Almaty, the annual “Digital Agenda into the Globalization 2.0” Forum took place dedicated to the innovative ecosystem in Eurasia. The Forum`s host is Ministry of Information and Communications of the RoK.

The Forum was attended by heads of governments from EEU countries, international IT experts, representatives of international organizations, heads of technological parks, politics, scientists, businessmen, who gathered on the single platform to discuss establishment and development of single innovative ecosystem in Eurasia designed to unlock the technological potential of the countries.

As part of the “Digital Agenda into the Globalization 2.0” Forum, the plenary session took place with participation of the following Prime Ministers: S. Rumas (Belarus), B. Sagintayev (Kazakhstan), M. Abylgaziyeva (Kyrgyzstan), D. Medvedev (Russia), Vice-Prime Minister of Armenia M. Grigoryan, Chairman of ECE Board T. Sarkisyan, and also international experts. The attendees discussed the prospects of technological parks integration in Eurasia, shared opinions on relevant issues of digital agenda and exchanged experience on how to promote and support startup companies and young IT professionals.

Following the results of the plenary session, the participants signed Memorandum on Integration of EEU Countries` Technological Parks. The document was signed by representatives of the following technological parks: “Skolkovo” fund (Russia), “Companies` incubator” fund (Armenia), Hi-Tech Park (Kyrgyzstan) and Astana Hub International IT Startups Park (Kazakhstan), which became the initiator of the integration.

Objective and potential results of integration were discussed during the panel session “Digitalization in Innovative Ecosystem”, which was headed by A. Zhumagaliyev, Deputy Prime Minister-Minister of Defense and Aerospace Industry of the RoK.

The attendees of “Digitalization to Achieve Sustainable Development Goals” UN session discussed the role of ICT and innovations in implementing the Agenda by 2030 and reviewed the best practices of the UN countries in establishing national innovative ecosystems.

Over 50 technological industry experts from the US, United Kingdom, Germany, France, Singapore, Switzerland and CIS countries were speakers on the sessions.

The annual “Digital Agenda into the Globalization 2.0” Forum takes place upon the initiative by Nursultan Nazarbayev, which was claimed on October 11, 2017 at the  Supreme Eurasian Economic Council session. The forum`s objective is to formulate joint efforts, which will enable accelerating development of digital economies in EEU countries and enhancing their competitiveness.