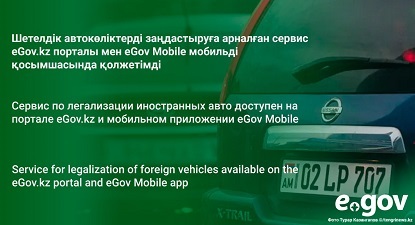 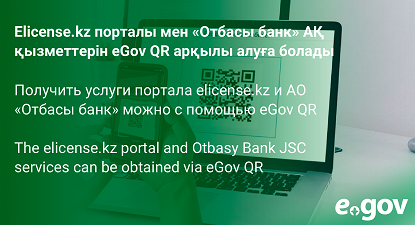 The elicense.kz portal and Otbasy Bank JSC services can be obtained via eGov QR

Individuals can now use eGov QR in the eGov Mobile app when working on the e-Licensing portal. Also, using eGov QR, users can sign a consent to the collection and processing of data when applying for rental subsidies on the otbasybank.kz portal and sign documents for external transfer operations on the enpf-otbasy.kz platform.

Reference center for robot-assisted surgery was established on the basis of hospital under Department of Presidential Affairs of the RoK and comprises all the capabilities for implementation of a new area of medicine in Kazakhstan, which is robot-assisted surgery. It is the first project of the kind in post-Soviet countries created not only to perform clinical investigations and operations but also to ensure training of doctors and developing their qualifications.

Bionic prosthesis is an artificial analogue imitating the work of a lost organ. Today, state-of-the-art technologies enables creating devices that most closely resemble functions of human limbs. A number of biological prosthesis existing on the market enable owners to perform a wide spectrum of activities such as holding items and cutleries, writing, walking and even doing sport.

Prosthetic robots are produced in Kazakhstan. One of the projects was implemented by Maulen Bekturganov, founder of MBionics company. Maulen developed and created the first bionic prosthesis of an arm in Kazakhstan. The prosthesis is intended for disabled people of 3rd category and enhances their lifestyle. The prosthesis closely imitates a human arm functional. Maulen made a breakthrough in Kazakhstani science, which helps citizens to restore to full life without leaving the country. He plans to proceed with the similar development for ulnar mechanism, shoulders and so on in order to develop as many items as possible for disabled people.

Postal company employee puts a parcel to one of the eight sections in the robot and sends it to the corresponding addresses. Akbota moves in autonomous mode and can identify road items, people, and also detours pits and pavements. When the robot comes to the right address, it sends SMS notification. A customer withdraws parcel by indicating a password sent to his/her mobile phone.

The electric car is equipped by four self-contained power units and accumulator. The robot`s body is made out of metal which excludes the opportunity to wreck it or to withdraw parcels. The first version had been designed within two months and elaborated within six months. In the short run, developers plan to present a new enhanced version of robot postman.

Robot Kuanysh consults customers in EXPO Center office and can identify and memorize faces and entertain customers. Kuanysh is not the only robot consultant in KasPost JSC. In digital office, robots Pepper and Saule also provide help to customers. Thanks to HD cameras and distance sensors, Pepper can identify the surroundings and react on human emotions.