The projects of the electronic government include dozens of different information systems (IS), registers, State databases (SDB), hundreds if applications and services. To them refer IS “E-Akimat”, IS “E-Notary”, SDB “Individual entities”, SDB “Legal entities”, SDB “Real estate register”, Integrated system of documents management of state agencies, Integrated ISC “PSC”, IS SDB “E-Licensing”, intranet-portal of state agencies, gateway and payment gateway of the electronic government, Mobile Government Information System, chat-bots at Telegram, Facebook and Vkontakte and many others. We will tell you about some of the systems which you may use and apply independently.

The Open Data - raising public awareness of key and socially significant areas of government activity and providing the possibility of creating new applications based on open data.

The Open Budgets to facilitate representation of citizens about the concept of "budget" in the state and to promote the development of an active civil position through public control over the spending of budget funds.

The Open dialogue - to provide citizens with the opportunity to interact with the first leaders of state bodies directly.

The Open Data portal is a platform where publicly accessible data of state bodies are placed in a machine-readable form, which allows society to receive reliable open data from information holders in a convenient form, including for reuse.

The beta version of the open data portal was first launched in 2013. In addition, an application programming interface (API) is available on the portal, through which data can be accessed through requests.

Based on the open data, mobile applications and services are developed and made available for download on the portal by increasing the amount of data, as well as the conduct of events such as competitions and hackathons.

Based on open data, mobile applications and services are    developed and made available for download on the portal by increasing the amount of data, as well as by holding events such as contests and hackathons.

The Open RLA portal is a single platform for discussion of draft bills, draft standards of public services and permits. Everyone can express their opinion and take part in the development of the RLA. The Open RLA allow each citizen to get acquainted with the project before he goes to the government agency and higher authorities for approval.

In 2015, the Open RLA portal was launched, where there is a public discussion of not only the standards of public services under the Law "On State Services", but also with the adoption of the Law "On Access to Information", it became possible to discuss drafts of all regulatory legal acts and conceptions of bills.

The Open Dialogue is a platform for establishing effective feedback between government agencies and society.

The purpose of the Open Dialogue Internet portal is to provide citizens with the opportunity to interact with the government through portal tools.

● Blog platform of the heads of GAs,

● The “Surveys” system and

The procedure for submitting and reviewing applications in the blog platform of the heads of government agencies is prescribed in the law. According to paragraph 5 of Article 11 of the Law "On Access to Information", requests for a blog platform are equated to a written request. The request does not require signing, provided that you have an account on the e-government portal and the subscriber number is connected to it. Also, the component includes Internet conferences with the participation of members of the Local Executive Bodies and Central Government Agencies, which are regularly held since 2008 on the "electronic government" web portal.

The Polls system is a new service in relation to other components of the Open Dialogue. The system is designed to create polls, publish polls on the available channels of "e-government" and "mobile government", save and transmit polling results to clients. The system allows you to pass polls through SMS-messages, mobile applications, Personal Cabinet, Open Dialogue portal, as well as social resources.

The On-line Service provides citizens with several options, including filing a call by a mobile operator, determining a carrier by phone number, viewing the quality of cellular communication in the context of cities.

The purpose of the Open Budgets Internet portal is to facilitate representation of citizens about the concept of "budget" in the state and to promote the development of an active civil position through public control over the spending of budget funds.

On the portal of open budgets, pursuant to paragraph 3, Article 17 of the Law "On Access to Information", the placement and public discussion of draft budget programs and reports on the implementation of budget programs is conducted, as well as budget reporting, consolidated financial statements, information on the results of state audit are posted.

The tool of information support in accordance with the interests of the target audience of chat bots functions on the e-Government portal egov.kz, on the site 1414.kz, as well as in messengers Telegram, Facebook and Vkontakte.

Chat-bot in 24x7 mode provides the necessary information from the ICC knowledge base and a link to the site sections with full information upon user request.

Since when in 2015 Telegram launched a platform for creating bots, the messenger has become a convenient channel for obtaining a wide variety of online services. Many developers began creating analogs of various applications and services in the form of chat bots, which are interacted with predefined commands in the chat mode.

To date, the following services are available through the bot EgovKzBot2.0 (https://t.me/Kenes1414Bot):

To get started with the bot, you need to be registered on eGov.kz and bind your phone number to the portal profile. Registration and binding of the phone is carried out strictly using EDS, and if you do not have it, then read the information on the procedure for obtaining EDS in the section "For the first time on the portal".

The binding of the phone number, or registration in the base of mobile citizens (MCB), takes place at the time of initial registration on the portal, as well as through the settings of the Personal Account at eGov.kz. It will require confirmation via SMS code and signing with the user's EDS.

The Telegram messenger needs to be installed on your smartphone, to which your number is attached, and to search through the bot search by the name of @Kenes1414Bot. To start the bot, you need to click on the Start command and send the phone number via the menu. 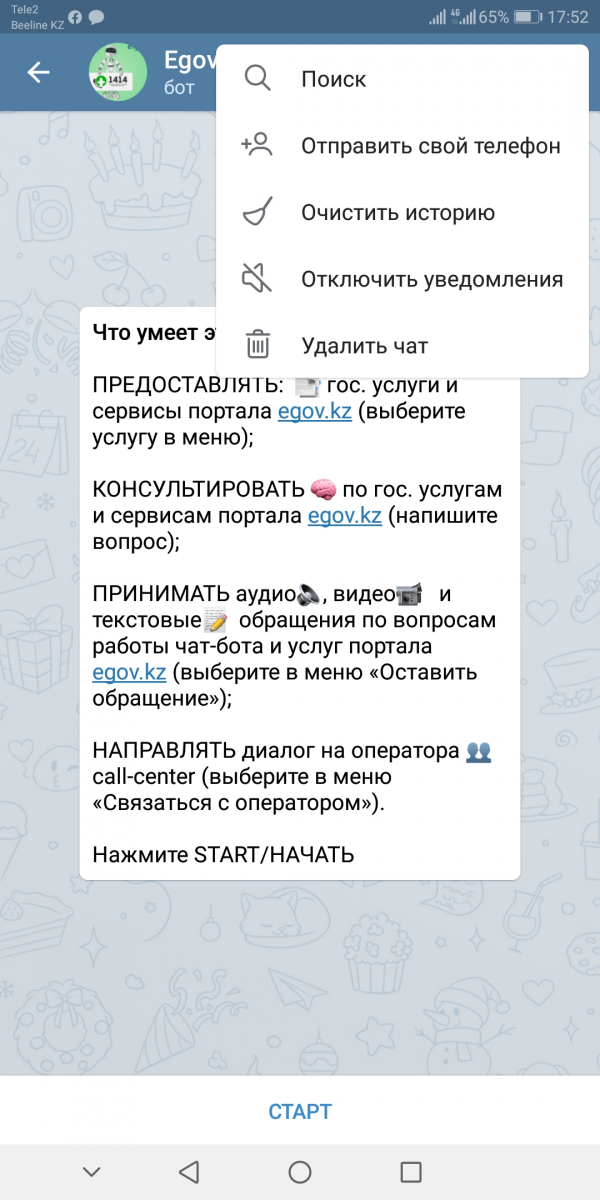 Let's note an important point: if you make the initial launch of the bot through other messenger platforms, it will not work. That is, when you try to run the bot through a web or desktop version, or on a tablet, the services will be unavailable. It should be launched on the smartphone to which your phone number is attached. After that, the bot will work on all platforms.

You can request services right after the start, with the help of the specified command buttons. 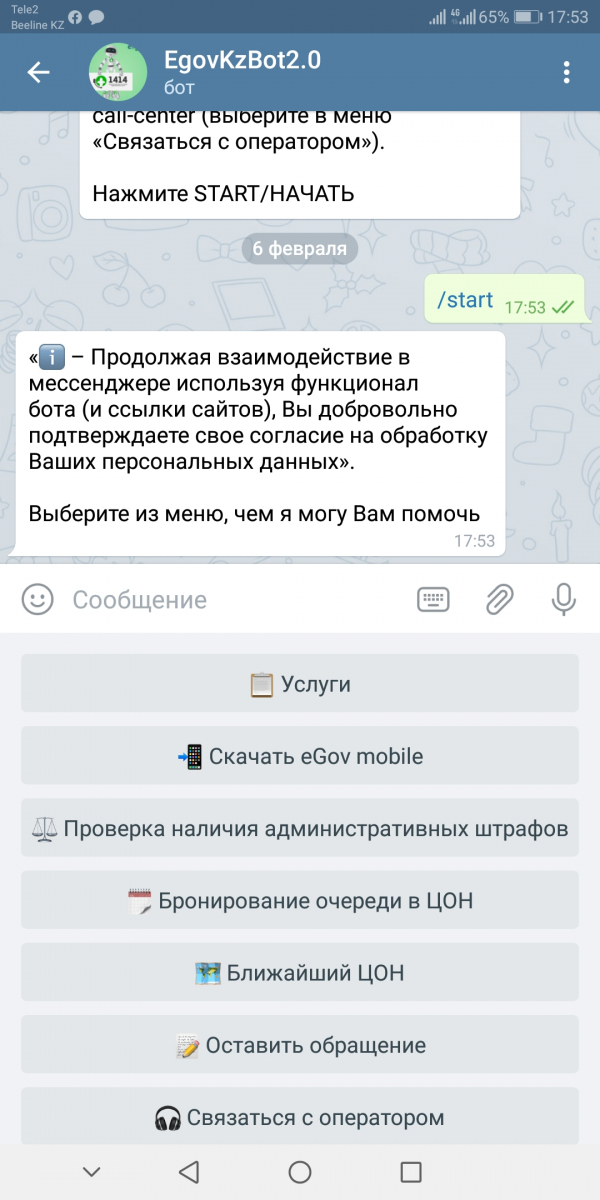 Select the desired service, its parameters and confirm the request through the received SMS-code. 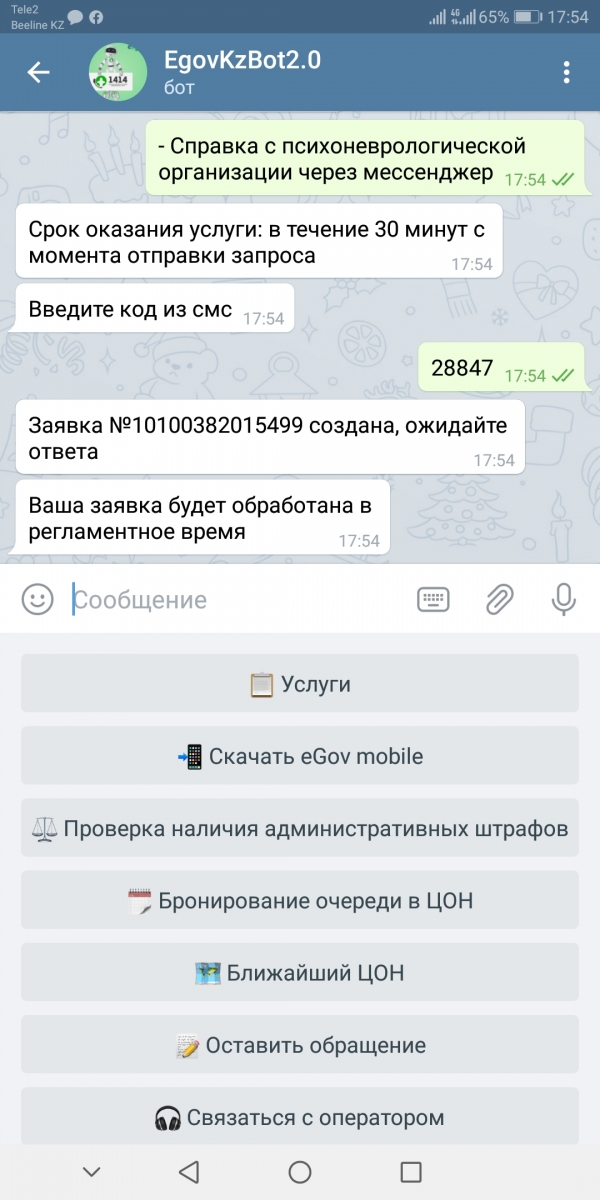 After checking the status, if the query result is ready, you can download it or send it to the desired e-mail address. 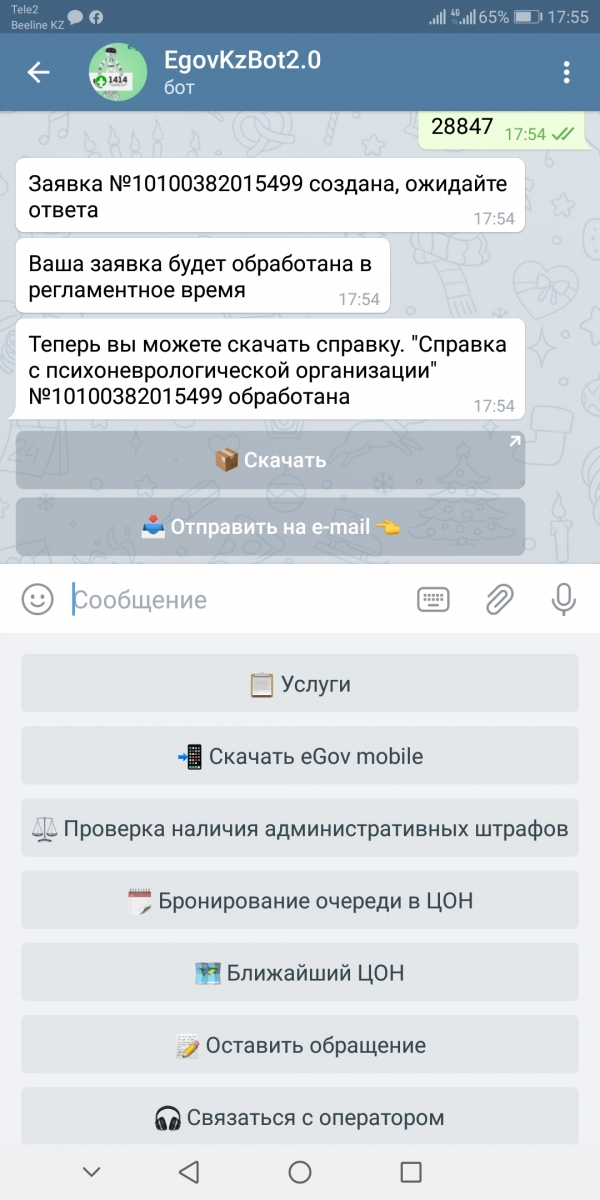 This is the general process of obtaining services via Telegram-bot, everything is very simple, fast and convenient. The number of services available through the bot will gradually expand

The Smart Bridge project is a simplified process of integration between information systems of government agencies and the private sector.

The purpose of creating a Smart Bridge project is:

- simplification of organizational procedures for integration, interaction of government bodies with business and the development of a competitive environment (within the framework of the “Showcase of Services” platform of the “Smart Bridge” project).

The Service Showcase platform provides solutions to the following tasks: