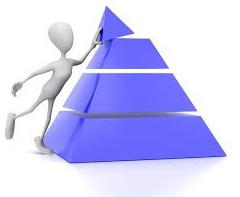 A classic financial pyramid is a fraudulent scheme to obtain an income. Frauds offer you to invest money at a very high interest rate, promise a guaranteed income and ask to attract your friends to the project. Be careful as a successful investment campaign might turn out to be a financial pyramid. Peculiarity of financial pyramids involves a promise of obtaining money in a quick and easy way.
Financial pyramids are often position themselves as investment companies.  For instance, they offer to acquire shares and bonds and promise to invest into a profitable construction, gold mining or superefficient production. They make up sensational and attractive slogans for their advertising campaigns, for example:  web company, innovation project, cryptocurrencies, housing cooperatives, gold, social media.  Thus, financial pyramids are trying to keep up with the times.
Life cycle of today`s pyramids depends on the extent of an organization and programs. Depending on the scope and specific nature, pyramids can exist within the period from 3 days to 16 years.  For example, a famous investment company Madoff Investment Securities (US) had been existed for 48 years (1960-2008 г.) in the form of a pyramid.

By familiarizing with the features of fraudulent schemes, you can protect yourself against actions of dishonest “false” entrepreneurs and keep your funds intact.

What is to be done if you were caught in a financial pyramid net?

Ban is put to financial pyramids` activities in more than 30 countries.  Including, Austria, Great Britain, France, Canada, Italy, China, United Arab Emirates.
The following liability is provided for in Kazakhstan:
1. Criminal liability for establishment of financial pyramid and (or) for its management (pursuant to article 217 of the Criminal Code of RK).
2. Аdministrative liability for production, distribution and publication of advertisements related to activities of a financial (investment) pyramid (pursuant to article 150 of the Code of RK “On Administrative Violations”).