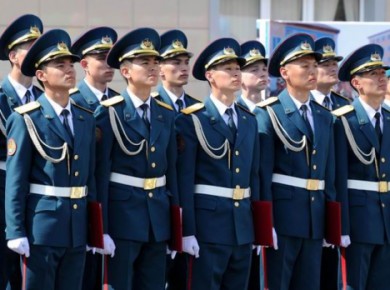 The Almaty Bauyrzhan Momyshuly “Zhas Ulan” Republican Military School was established in 1983. Pursuant to Resolution of the Cabinet of Ministers of the Kazakh SSR No. 189 as of March 26, 1991, it was named after the Hero of the Soviet Union Bauyrzhan Momyshuly.

Shymkent Sabir Rakhimov “Zhas Ulan” Republican School. The Shymkent Republican Military School was established pursuant to the Decree of the Central Committee of the CPSU and the Council of Ministers of the USSR No. 473 as of May 26, 1983 and Order of the USSR Minister of Defense No. 108/3 as of May 29, 1984. By Decree of the Government of the Republic of Kazakhstan No. 497 as of May 30, 2003 it was named after the Hero of the Soviet Union, Major General Sabir Rakhimov.

About 1000 students of 10th and 11th grades study at “Zhas Ulan” republican schools in Almaty, Karaganda and Shymkent.

The daily activities of schools are organized based on the boarding system with round-the-clock stay of the students, so called apprentices, and their full supply out of the budget funds in accordance with the established standards.

The “Zhas Ulan” republican schools major tasks are as follows:

1. Creating necessary conditions for the students to get a general secondary education with a subsequent referral to study in the military educational institutions.

2. In-depth studying of the state language, foreign languages and military disciplines, as well as enhanced physical training aimed at the formation, development and professional becoming of an individual based on national and universal human values, scientific achievements and practice.

3. Cultivating Kazakhstani patriotism and values-based attitude to the state symbols of the Republic of Kazakhstan.

The “Zhas Ulan” republican schools closely cooperate with Nazarbayev Intellectual Schools with aim to sharing the best practices in the field of secondary education, introducing new teaching and education methods into the educational process, enhancing the teachers qualifications and providing new approaches, techniques and innovations.

For the purpose of comprehensive development of students, enhancement of their physical fitness as well as moral and psychological qualities, military sports games are annually held among the students of the “Zhas Ulan” republican schools and specialized lyceums. National teams of the Funny and Inventive Club from “Zhas Ulan” republican schools actively participate in the republican (regional) competitions among the secondary educational institutions of the Republic of Kazakhstan.

How to enroll to “Zhas Ulan” republican school

The “Zhas Ulan” republican schools (hereinafter: Schools) admit young men – citizens of the Republic of Kazakhstan not younger than fifteen, but not older than sixteen years old at the year of admission, who graduated from the 9th grade (10th grade in case of 12-year program) of the secondary education organization and received a certificate of completion of basic secondary education.

In the period from August 1 to 5 inclusive, the applicants who are physically fit to study arrive at the School with their parents (legal representatives) and apply for the admission to the School with attachment of the documents specified in Appendix 1 to these Rules.

Admission to the School is carried out in the period August 6 to August 20 on a competitive basis in 5 (five) stages:

4th stage: verification of physical fitness according to the standards pursuant to Appendix 2-1 to the Rules.

Undergoing of each stage of the competition is allowed once only. An applicant who has not passed the previous stage is not allowed to the next stage.

Aptitude screening of applicants includes verification of motivation level, stress resistance, critical and logical thinking. The screening is carried out by the admissions committee in conjunction with the Educational and Ideological Work Department of the School in coordination with a structural unit. The applicants who were not recommended based on the results of aptitude screening are considered not to pass the stage.

Math test and language test are carried out to determine the level of knowledge of an applicant.

Test questions in math and a language of instruction are drawn up according to the basic secondary education program provided for in the Model Programs and each test has 20 questions. In tests, 1 question is equal to 1 point.

The pass to the next stage, an applicant needs to get at least 5 points in each subject.

Final medical examination of applicants includes verification of physical fitness to study at the School.

Verification of physical fitness of applicants includes passing of physical training standards provided for the basic secondary education pursuant to the Appendix 2-1 to these Rules. Applicants who have scored less than 60 points in total for all the exercises and have not scored the minimum points in two disciplines are considered not to have passed the stage.

The competitive selection involves drawing up of the applicants’ rating from the maximum to the minimum rating score and is carried out by the admissions committee on the August 20.

Children of military personnel have the right for non-competitive enrollment to the School subject to the conditions provided for in Clause 3 of Article 52 of the Law.

Decision of the admissions committee is announced before 10 AM of August 21 and is posted on the School's website. Appeals are accepted until 6 PM of August 21.

Decision of the admissions committee is approved on August 22 by order of the head of the School.

Students arrive to the school before August 29 of the admission year.

The list of documents submitted by applicants to the School:

1. Application for enrollment in no particular format indicating surname, name and patronymic (if any), date of birth, residence address, contact details of parents or legal representatives.

6. Letter of recommendation sealed by a director of an educational institution.

8. The orphans and children who were left without care of one or both parents in connection with the restriction or deprivation of their parental rights, recognition of the parents as missing, declaring them dead, recognition as incapable (partially capable), as well as in other cases of the absence of the parental care, additionally shall submit one of the following documents:

certificate of death of the parents;

court decision on restriction or deprivation of parental rights of the parents;

Physical training standards for admission to the Schools